Great to see you, we hope you like our site! You can find out more about us by checking out our Bio below and browsing through the pages for music, photos and info on past and future gigs. Please feel free to comment or ask any questions about how to book us for house concerts, workshops, performances or to purchase our music. You can also contact us  by phone at @250-833-4990 or by email at blukellyhopkins@gmail.com 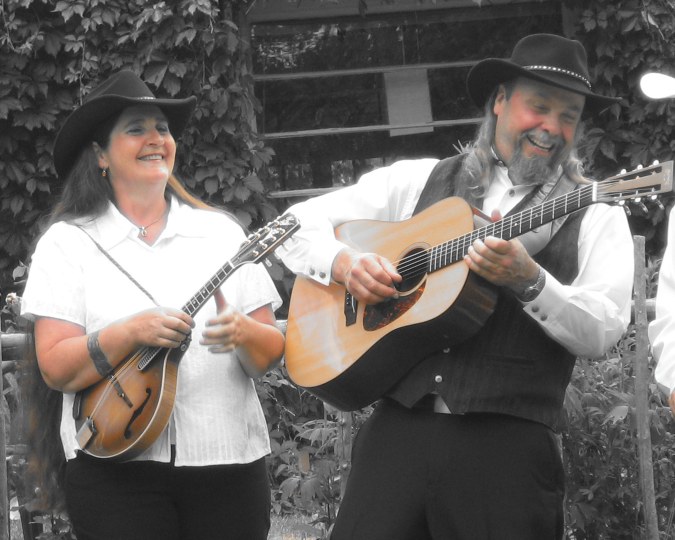 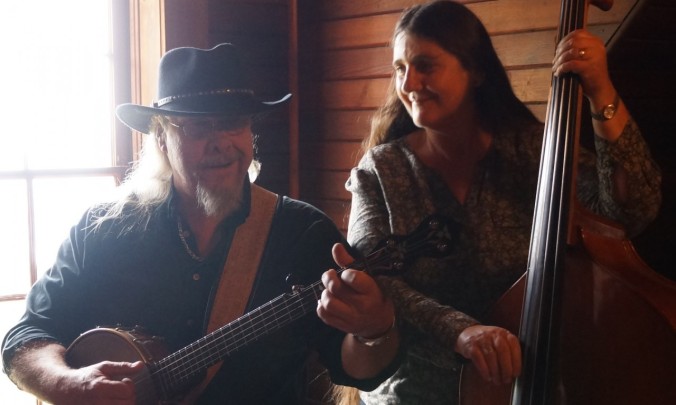 Winners of 2 BCIMA music awards, Blu & Kelly Hopkins are a songwriting multi instrumentalist duo. Focusing on original material, their extensive repertoire lets them blend traditional and contemporary tunes into their show with a dash of humour to achieve an entertaining, exciting, yet mellow brew of good times good tunes!

The couple are a bona fide channel for classic folk, roots and country. Blu demonstrates again and again a deep connection to the lyrics of the greats. Names like Stan Rogers and John Prine float over the campfire when he and Kelly bring their award winning talent to the party.

Blu & Kelly  have been travelling, writing songs and performing them for many years. A true troubadour, Blu’s influences include everything from Bill Monroe and Woody Guthrie, to Gordon Lightfoot and Stan Rogers. His storytelling songwriting style reflects his experience working and performing across Canada. Blu has lived the songs he sings.
In addition to the two BCIMA awards he’s won, Blu has been nominated sixteen times for Okanagan Music Awards and BC music Awards in both Songwriter and Folk Artist categories and with Kelly as Folk Roots/Bluegrass band of the year.
Kelly is also an accomplished songwriter, her songs ranging from rollicking & fun to heartfelt & poignant ballads. She is a great acoustic bass player, and her mandolin compositions are traditional sounding yet fresh tunes that are delighting audiences and other musicians everywhere. Kelly’s warm harmonies combine nicely with Blu’s smokey baritone voice for a wonderful relaxed sound

The duo have shared the bill with many well known artists including, Kelly Joe Phelps, Allen Dobb, Bill Henderson, Ben Mink, Veda Hille, Jim Byrnes, Roy Forbes, Todd Butler, Ken Hamm and for the past seventeen years have performed with Valdy & Gary Fjellgaard on their “Contenders” tour of the southern interior of B.C..

Together they have produced and recorded several acoustic projects for other artists in their “Silvercreek Studio” as well as teaching and leading workshops and seminars on Songwriting, guitar, bass, Merlin, clawhammer banjo and performance, at writers festivals and music festivals. They love to play anywhere people love live acoustic music, including theatres , clubs, house concerts and festivals. An evening with the Hopkins’ is always a treat for the ears.

Charismatic, engaging and humorous, Blu and Kelly Hopkins and their brand of “Organic Acoustic Music” are winning new fans and charming audiences wherever they play.

“After the numerous times I’ve caught Blu & Kelly’s performances since moving to the Shuswap  I am continually knocked out by Blu’s soulful interpretations of classic folk roots songs, and his deep connection to the lyrics of the greats ranging from Stan Rogers to John Prine.  Then they add another dimension to the show with their well crafted originals………..Peter North, Artistic Director , Salmon Arm Roots and Blues Festival and Radio Host CKUA Radio.